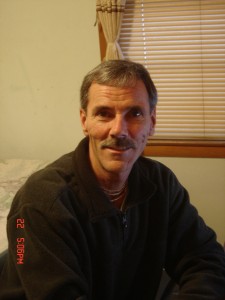 William J. “Bill” Helminger, age 57, passed peacefully from this life on Monday June 9, 2014 at the Hospice House in Pleasant Prairie, Wisconsin after a long struggle with emphysema.  William was born in Kenosha on August 11, 1956 to James and Loretta Helminger. He was the youngest of their three children.

Though he traveled widely, Bill was a lifelong resident of Kenosha. He attended St ThomasGrade School and BradfordHigh School. He was an avid golfer and was known as “Beer Cart Bill” at Bristol Oaks Country Club where he was employed for 14 years. This job allowed him to pursue his passion to travel. He spent many winters in Belize and Guatemala.

During his teens Bill became a practicing Hindu and followed these beliefs throughout his life. To fellow Krishna devotees he was known as Bhagavan Acarya Dasa. He attended services at the Chicago area Hare Krishna temple. One of the highlights of his life was his visit to India, the birth place of his Hindu religion.

In the recent years Bill enjoyed his lawn care business as he provided excellent service to many Kenosha residents. Today his sons, James and Joseph, continue the family business. He also shared his love of sports and pride for BradfordHigh School with his sons.

Bill is survived by his two sons, James and Joseph of Kenosha, his sister Lynn (David) Lepak of Waukesha and his nieces Sara Helminger, Ashley Rau, Lindsey Rau, and Samantha Helminger, and his nephew Dylan Helminger, two aunts, an uncle, many cousins and friends.

Visitation with the family will be held Thursday, June 12, 2014 at 5pm at the Kemper Center Founders Hall, 6501 3rd Avenue, Kenosha, WI. A memorial service will follow at 6pm.