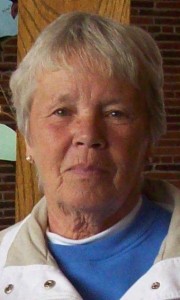 Donna Mae Funk, age 73 a resident of Somers passed away on Thursday, June 5, 2014 at Hospice House in Pleasant Prairie.

Born on July 24, 1940 in Racine WI she was the daughter of the late Willard Eugene and Geneva (Dammon) Perkins.

On October 31, 1957 Donna married Lawrence J Funk at St. Rose Catholic Church in Racine. She worked in Food Service at UW Parkside and Pets Golf Course. Donna was also a tour guide for casinos. She was a member of Moose Lodge #155. Donna loved to read and travel especially to Las Vegas.

Donna is survived by her husband Lawrence of Somers, sons Lawrence L (Pam) of Gainsville FL, Thomas A of Saukville WI, Eugene G of Kenosha and Joseph A (Tina) and daughters Pamela J Funk of Kenosha and Patricia M (Scott) Siegal of Kenosha. She is also survived by 20 grandchildren and 6 great grandchildren. Donna is further survived by brother Eugene W Perkins and friend Shirley of Racine, sister Patricia A Kroes of Wildrose WI, many brother-in-laws and sister-in-laws.

A Mass of Christian Burial will be held on Tuesday June 10th 2014 at 11:00AM at St. Peters Catholic Church in Kenosha. (2224-30th Avenue) Visitation with the family will be on Tuesday at the church from 9:30AM until the time of mass. Burial will take place at a later date.

In lieu of flowers, memorials to St. Peters Catholic Church would be appreciated.