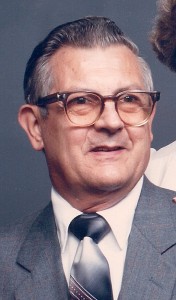 James Conrad Scheel, age 84, of Sturtevant, died Saturday May 17th 2014, after a long battle with leukemia, at Wheaton Franciscan All Saints Medical Center surrounded by family.

James was born June 2, 1929 to Mabel and Albert Scheel in Racine. He attended schools in Racine before enlisting in the U.S. Army in 1946.In 1952 he married Carol Sokolowski. They had five children; Rick (Barbara) Scheel of Texas, Randy Scheel of Racine, Dawn Scheel of Louisville, Kentucky, Dory (Neal) Camp of Mountain Home, Arkansas and Robby Scheel of Racine. They divorced in 1965. In 1969, he was united in marriage to Dorothy (Haebig) Mutchler and welcomed her three children as his own; Kathy (Bill) Rainbolt of Rockford IL, Donna Cornelius of Racine and Barbara (Timothy) Magnussen of Baldwin, WI. He is also survived by 17 grandchildren, 15 great grandchildren and one great-great grandchild.

James was Chief of Police for Elmwood Park and North Bay for many years and he also ran the Racine Private Police. He and Dorothy ran Innovative Communications until retirement. After he retired, James worked part time as a Security Guard at PerMar. One place he really enjoyed working as a guard was the Racine Public Library.

James was the co-owner of an airplane in the 1970’s and really enjoyed flying with his best friend Bill Fiegel.

Preceding him in death were his parents, his wife Dorothy and his son-in-law Neal Camp.

The Scheel family sincerely thanks Dr. Mullane, Dr. Decheck and their staffs as well as the staff of Lincoln Village for their care of Dad during his illness.

Also special thanks to Bill & Marie Fiegel and Esther Griffin for their help to family members in Dad’s final days.

Interment will be on Monday June 2nd at 11:00 am at the Southern Wisconsin Veterans Memorial Cemetery 21731 Spring Street Union Grove, WI 53182 with a luncheon to follow.