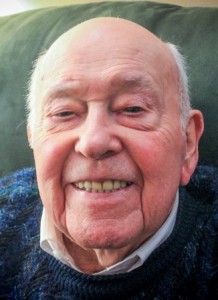 William (Bill) Frickensmith (Frickenschmidt) Jr. went to be with our Lord on July 20, 2014 after 96 years of life. Bill slipped from this life into the next after a courageous battle with cancer while at home with his loving family at his side.  Bill was born in Racine, Wisconsin on February 12, 1918, and was a life-long resident of Racine.  On August 30, 1947, Bill married the former Olga Federkins in the St. Nicholas Russian Orthodox Church (Kenosha).

Bill graduated from William Horlick High School in 1936.  Bill served 26 months in World War II with the 135th Medical Regiment in the southwest Pacific, including New Guinea and New Britain..

Shortly after graduating from Marquette University, Bill joined Ladish Company in Cudahy and retired from his industrial engineer position in 1981.

Bill was an upland game and waterfowl hunter.  He enjoyed bait casting and was an avid fly rod fisherman.  He enjoyed playing tennis, was an avid reader of non-fiction and enjoyed traveling extensively with his wife throughout North America and other parts of the world.  Bill was a member of Trinity Lutheran Church.

Bill is survived by his wife, Olga, of almost 67 years, their four children, their spouses, nine grandchildren and one great granddaughter. Daughter Cynthia Ann (Pastor Aaron) Wheaton of Terre Haute, Indiana, and their sons, Isaac of Wilmore, Kentucky, and Andrew (Kelly) and their daughter, Rayen of Terre Haute, Indiana; son William III and his daughter, Jasmine, of Milwaukee; son Lance (Judy) and their children, Leon, Destiny, Alia, and Victor of Monticello, Illinois; and son Jon (Joan) and their daughters, Kaitlyn and Sarah of Racine.  Bill is also survived by brother-in-law George Hoffmann, brother-in-law Joseph (Yvonne) Federkins of Mt. Prospect, Illinois, as well as numerous nieces and nephews and grand nieces and nephews.

Two of Bill’s greatest joys were the annual family gatherings held every July 4th and December 25th when the four children, their spouses and all nine grandchildren would come home for a family celebration, filling the house with lots of laughter and lively discussions.

Special thanks to Dr. Engel, Dr. Han, Dr. Clark and hospice nurse Emily for all of their care and compassion.