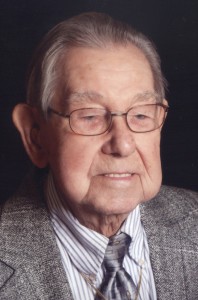 Chester was born in Kenosha on November 28, 1922. He was the son the late Jan and Apolonia (Wohlman) Zdanowicz. He was a lifelong resident of Kenosha and attended St. Casimir’s School. Chet was very proud to have served his country in the U.S. Army during World War II.

On September 28, 1946, he was united in marriage with Doris Loraine “Lori” Burby at St. Casimir’s Catholic Church. Chet was employed at MacWhyte Wire Rope Company; retiring in 1979. They moved to WoodruffWI and opened up C & L Sports Bar. They returned to Kenosha in 1993.

Chet belonged to St. Therese Catholic Church. He was an avid bowler and golfer and enjoyed his trips to Potawatomi Casino.