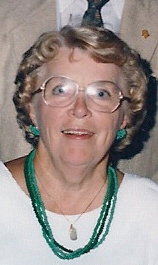 Bonny was born on January 12, 1922 to the late Emil J. and Jane (Jackson) Larsen in Kenosha WI. She was educated in the schools of Kenosha and graduated from Mary D. Bradford H.S. in 1940.

In 1947 Bonny married John A. Cahill at St. Matthew Church in Kenosha. She was employed as an office manager in the medical field and was also employed by American Brass and US Standard Products. After living in Michigan and Ohio in 1960 she moved to West Allis returning to Kenosha in 1986. She was a diehard lifelong Cubs fan. She was also very involved in local republican politics, ARK Club, St. Matthew’s altar guild and Stephen Ministry.

Funeral services will be held on Thursday July 31st 2014 at 11:00AM at St. Matthew Episcopal Church in Kenosha. (5900-7th Avenue) Visitation with the family will be on Thursday at the church from 10:00AM until the time of service. Entombment will follow at Greenridge Cemetery.

Bonny’s family would like to express their sincere gratitude to Parmly LifePointes and St Croix Hospice for their great and gentle care.