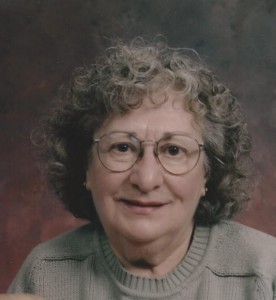 Born on May 25th 1922 in Racine WI she was the daughter of the late Anthony and Mary (Lapuma) Sabatino.

In 1943 she Edmond J. Maranger in Racine. They would later divorce. She would then marry Arnold Trombi in Kenosha in 1980. He would precede her in death.

She was a homemaker in her own home, but also worked at Dremels Corporation from where she retired.

She was member of Holy Rosary Catholic Church. Virginia loved to play Bingo. She was a doll collector and attended many doll shows. She also enjoying interior decorating and was very proud of her home.

She is survived by one son; Edmond D. Maranger of Somers; one daughter, Diane Maranger of Kenosha; and one granddaughter Shannon (Darren) Taylor of Kenosha. She will be dearly missed by all her family and friends and her neighbors.

She was preceded in death by her parents, her husbands, one sister Toni, and one brother Joe.

A Mass of Christian Burial will be held on Friday July 27th 2012 at 6:00PM at Our lady of Holy Rosary Catholic Church in Kenosha. (corner of 45th Street and 22nd Avenue) Visitation with the family will be on Friday at the church from 4:00PM until the time of mass. Burial will take place on Saturday at Sunset Ridge Memorial park at 10:00AM.

In lieu of flowers memorials would be appreciated with a charity to be decided later.