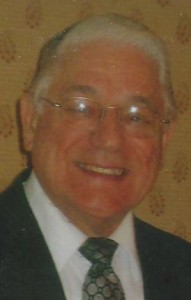 Born on March 13th 1927, he was the son of the late Otto Pomplin and Nona Holland. He was adopted and raised by Harry Lorenzen who had married Nona.

He served in the US Navy.

He was employed for 30 years as an insurance agent for Metropolitan Life Insurance.

He was a member of St. Casimir’s Catholic Church until it closed in 2000. He then joined Our Lady of Mount Carmel Church.

He loved to go fishing and hunting with his sons in law and his grandsons. He was a member of the Kenosha Bowmen and enjoyed archery. He was a very talented wood worker and sold his crafts at many craft fairs. He was the sole wood urn provider of the “Lorenzen Line” to Casey Family Options Funerals and Cremations until his health didn’t allow him to. He enjoyed his morning coffee with his “gang” at a local restaurant and kept up on current events, including local politics. He was an avid card player. He was involved at the Kenosha Achievement Center and in Special Olympics. His great grandchildren referred to him affectionately Grandpa Cookie.

He was preceded in death by his parents; one daughter Claudia Mann a son in law, William Yurchak and a great granddaughter Haileigh.

A Mass of Christian Burial will take place on Friday July 27th 2012 at 12:00 noon at Our Lady of Mount Carmel Catholic Church. (1919-54th Street) A visitation with the family will be on Friday at the church from 10:00AM until the time of mass. Entombment will follow at All Saints Catholic Mausoleum.

In lieu of flowers, memorials to either the Kenosha Achievement Center or to Special Olympics would be appreciated.

Also, a special thank you to the entire staff of Brookside care Center as well Dr. Nanul and Dr. Habel and their staff for their wonderful compassionate care.