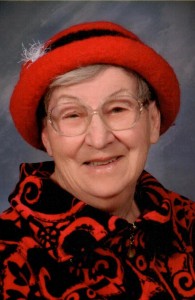 Vincenza Nierenberger passed away peacefully in her sleep surrounded by her loving family on Wednesday December 16, 2015.

Born in Lattarico, Cozenza Italy on December 8, 1925, she was the daughter of Silvio and Evangelina (Zinga) Balsano. She came to this country in November 1934. She was educated at St. James Catholic School and later got her GED at Gateway Tech. On May 3, 1947 she married John Nierenberger. He died February 14, 2008. Together they had five daughters.

Vinnie sewed alterations all her adult life, working for Hollebs, Crystals Menswear, Leaders, Spoza Elegante’ to name just a few. She was always in demand for her skills as a seamtress. She loved sewing and creating – making or altering wedding dresses for many family members

She was the Matriarch of a very Italian family, hosting all the Holiday Feasts. She taught many of the recipes to her daughters and even her German son-in-law, so that they could continue the family traditions.

A mass of Christian Burial will be celebrated on Monday December 21st 2015 at 5:00PM at St. Peters Catholic Church in Kenosha. (2224-30th Avenue) Visitation with the family will take place on Monday at the church from 4:00PM until the time of mass. Private burial will take place at St. James catholic Cemetery.

The family would like to extend a special “Thank you” to Fr. Ireneusz Chodakowski, who brought her Communion on Fridays and Jessica, Sarah, Linda, Jo Ann and Chaplin Charlie of Hospice Alliance who all helped make her last days so comfortable and peaceful. You are all a “Special kind of people”.