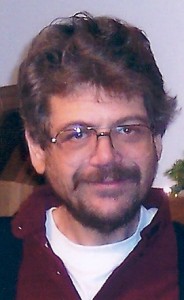 Robert C. (Ding Ding) Thomas (50) passed away Friday December 17th 2010 at St. Catherines Hospital. He was born July 29th 1960 to Robert R Thomas and Delores S (Breiling) Thomas in Kenosha WI where he resided. Bob was raised on the family farm and attended local schools until the age of 17 when he enlisted in the US Army. After his honorable discharge from the US Army, he received his CDL and drove truck over the road for various truck companies until a serious accident in 2000, leaving him disabled.

In 1993 he had a daughter (Christine Thomas) whom he raised and took with him on many trips. He enjoyed restoring, driving and the history of his old cars, and rooting for his favorite football team, the Green Bay Packers, but Bob’s greatest passion was riding his Harley with his dog (Dutchess).

Funeral services will be held on Wednesday, December 22 at 6pm at St. Lukes Lutheran Church (6700 30th Ave, Kenosha WI.) Visitation with the family will be on Wednesday at the church from 4:00PM until the time of services. Burial will be private for immediate family.