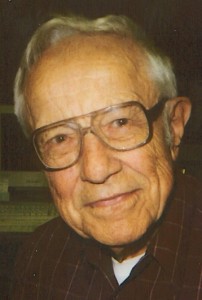 Matthew G. Kulbiski, 93, of Pleasant Prairie, died peacefully in his sleep on Friday, December 17, 2010, at St. Josephâ€™s Home for the Aged.

He was born on June 18, 1917, in Kenosha, the eldest son of the late Joseph and Helen (Mackiewicz) Kulbiski. He attended local schools, graduating from Kenosha High School in 1935. On August 5, 1950, he married Kathleen Edwards at St. Anthonyâ€™s Catholic Church in Kenosha. She preceded him in death on March 24, 1998.

Matt was employed as an inspector at American Motors, from which he retired after 30 years, on April 1, 1975. He was the chief assistant coroner for Kenosha County from 1971 until 1987, serving under Coroner Thomas Dorff, with whom he helped organize the first Holy Rosary Sports Night in 1954. He also served in the Coronerâ€™s office in an unofficial capacity under Kenosha Countyâ€™s two previous coroners, Dr. Harold Wagner and Edward Wavro.

He is survived by a daughter Helen, and a son, Steven, both of Kenosha; and nieces and nephews. He was preceded in death by two brothers, Joseph and John Kulbiski; and three sisters Josephine Lester, Hattie Patalocchi, and Viola Swanningson.

A visitation will be held on Monday, December 27th, at St. Josephâ€™s Home for the Aged Chapel from 6:00 PM to 7:00 PM with services to follow at 7:00 PM. Interment will be private.

The Kulbiski family expresses its deepest appreciation to Dr. JoeGarretto, the staff of St. Josephâ€™sHome For the Aged, and HospiceAlliance for the outstanding careour father received.

Matt wished it to be known that, although a jury awarded him one million dollars in the lawsuit following the death of his wife due to the injuries she suffered in an automobile accident, he actually received none of the money awarded him, due to the declaration of bankruptcy by the defendant.