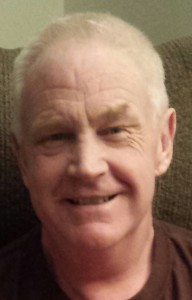 Ric was born in Lakewood, Ohio on January 31st, 1962 to Richard P. and Beatrice L. (Neal) Tallon. He lived in several different places in his life including Arlington, Texas, Merced, California and Davenport, Iowa before finally settling down in Delavan, Wisconsin.

Ric worked for Trinity Logistics (formerly Earnest Machine Products) until cancer treatments made it impossible for him to work by the end of 2014. On December 21, 1996, he was united in marriage with Revilleann Kelling, in Davenport at Vanderveer Conservatory. Ric was a huge fan of The Ohio State sports teams. He enjoyed attending car shows and collecting Hot Wheels cars. Ric loved camping and spending time with his family, including his therapy pets Lindsey and Alice.

Left to cherish Ric’s memory are his wife of twenty years, Revilleann Tallon of Delavan, and his loving daughter Issabella, whom was the light of his life; siblings, Donald Tallon of Garfield Heights, Ohio, Donna (Chad) Thompson of Hawkinsville, Georgia, Billie Lynch of Mentor, Ohio, JoAnn (Pat) Allen of Little Rock, Arkansas, Carlene (Neal) Johnson of Merced, California, and James (Debbie) Clark of Edmond, Oklahoma. He is further survived by his in-laws Bob and Nancy Baker of Leland, North Carolina, brother-in-law Mike Kelling of Davenport, Iowa and nieces and nephew Quin, Katie and Tabitha Thompson, along with many other close extended family.

Ric fought bravely against the cancer that ultimately took his life. He continued with radiation and chemotherapy treatments so that others could benefit from his experiences and the research that was gleaned. Ric would be most proud that as an organ donor, his unselfish gift may allow four other people the gift of sight.

In lieu of flowers, memorials can be sent to the family or www.gofundme.com to assist in the burial and outstanding medical expenses.