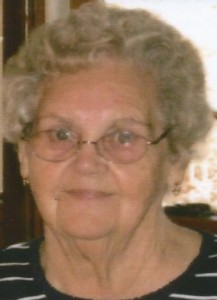 Imogene (Stiltner) Coleman, 86, of Kenosha, passed away peacefully on Friday, December 9, 2016, at the Hospice Alliance Hospice House in Pleasant Prairie.

Imogene was born on July 16, 1930 in Elkhorn City, Kentucky to the late James Harve and Delphia (Slone) Stiltner. She was raised with her four siblings in Elkhorn City. She was united in marriage on January 7, 1947 to the late Buford Coleman. They moved to Kenosha in 1961 and have since resided here. Imogene was a devout wife, mother and homemaker and enjoyed cooking and sewing. She was a very talented seamstress, specializing in making doll clothes, and even made her daughter’s wedding dress. She was also a devout Christian, and was a member at Bethany Lutheran Church in Kenosha. Most of all, she loved caring for her family. Imogene touched everyone who met her in a very special way. She was a beautiful person and she showed kindness and compassion to everyone she met.

She will be deeply missed by her four children; Randall (MaryAnn) Coleman of Lexington, Kentucky, Jerry (Cathy) Coleman of Kenosha, Gary (Andjie) Coleman of Kenosha, and Pamela (Chuck) LaPlante of Kenosha; her sister Joyce (Wendell) Belcher of Elkhorn City, Kentucky; ten grandchildren; seven great-grandchildren, and many other relatives and friends. Imogene was preceded in death by her parents; her beloved husband, Buford, on December 20, 2004; two sisters: Elaine and Carrie Sue; and a brother, James Ercelle.

Funeral services will be held on Wednesday December 14th 2016 at 12:00 noon at Bethany Lutheran Church in Kenosha. (2100-75th Street) Visitation with the family will be on Wednesday at the church from 11:00AM until the time of services. Entombment will follow at Sunset Ridge Memorial Park.

In lieu of flowers donations to the American Diabetes Association or Hospice Alliance would be appreciated.

Special thanks to the staff at Aurora Medical Center, United Hospital Systems and HRC ManorCare for the care that they have shown Imogene.