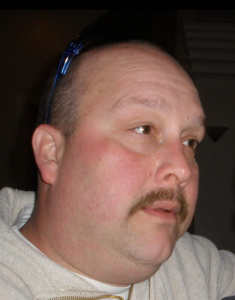 Michael Ferris Burrow, age 47, of Kenosha, passed away unexpectedly with his loving family by his side on December 12, 2017 at Froedtert South Kenosha Hospital.

Michael was born June 25, 1970, in Burlington to Jerry O’Neil and Ann (Burke) Burrow. He spent his early years in Orange Grove, FL and later made his home in Kenosha. Michael was a talented self-taught drummer and guitar player and he made many friends through his love of music. In 1990 he met the love of his life in Heidi Borggren at a Fanny Farmer candy store. His gift in making Heidi laugh is what made her fall in love with him. In the Fall of 1994 after five years of dating, they got engaged and were married October 7, 1995 at St. Mary’s Catholic Church in Kenosha.

In January 2003, Michael was blessed with his first child, a boy they named Ethan, who he nicknamed “Bubby”. Then after two years he was blessed with a daughter in January of 2005 who they named Ella; her nickname was “Boo”. Michael shared his love and passion of collecting toys with Ethan especially “Star Wars” and Ella got the comedic personality from her dad that would make everyone smile and feel comfortable. Michael worked second shift most of the time, but he would always find a way to attend their events. These two children were his pride and joy and there was nothing he wouldn’t do for them.

Michael was a lieutenant for Schmidt Security and stationed at the Chrysler Plant for seven years and then worked at Uline for eight years. He also liked to tinker with small engines and was very talented in the kitchen; always coming up with his own original recipes.  They took trips down south every year to visit family and friends and to share their love.  Michael made sure his family was always taken care of, and so his smiling face and larger than life personality will surely be missed by all.

He was preceded in death by his father Jerry, his niece Samantha Nikole Burrow and his brother-in-law Charles Wessels.

Funeral services for Michael will be held on Wednesday December 20, 2017 at 5:30 PM at St. Mary’s Catholic Church (39th Ave and 73rd St). Visitation with the family will be at the church from 3:30 PM until time of service.

In lieu of floral expressions of sympathy, Michael’s family requests that memorials to Heidi Burrow, to be distributed as per Michael’s wishes, would be appreciated.