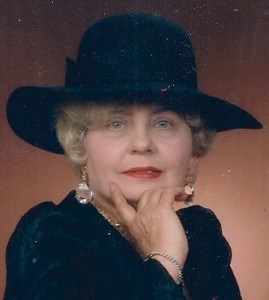 Martha was born January 5, 1924 in Chicago to Harry and Edna Fuller. The family moved from Chicago and Martha attended a boarding school in northern Wisconsin during her adolescent years. Back in Kenosha, she graduated from McKinley Junior High and Kenosha High School. As a young woman, she was a Hat and Clothing Model for Marshall Field’s in Chicago and that style would come to be her trademark for the rest of her life.

She met her first husband Andy Taleronik while working at AMC. They married and spent 30 years together before his death. The years Martha spent working at Barden’s in downtown Kenosha allowed her creative talents to shine and it also brought many lovely people into her life who would escort her into her future.

Martha met and married the love of her life Tom Dorff in 1996. They traveled and enjoyed each moment together until his death in 1999. Martha was a part of many groups including the choir at the Russian Orthodox Church, the St. Mary’s Lutheran Friendly Center, the monthly Barden Girls luncheon, the “33rd Avenue Gang” and the Theresa Waller Bunco Babes.

Until her final days, Martha was still giving to others & enjoying fashion, still wearing her rings and hats. Dear Martha had a generous and caring soul. She was very close to our Lord and at many times she was moved to carry out His word in action or deep prayer or in the beautiful spiritual poetry for which she was known. She was truly touched by His hand, and everyone who knew Martha realized her strong faith.

She was the kindest, most giving, loving friend- always there with a smile and a memento to mark every occasion, large and small. Of course, many times, there was no occasion at all! Her home, her boxed gifts and her perfectly matched attire, all depicted her unique and lovely style. Martha brought warmth and joy to our lives and her spirit will long live in our hearts.

Martha is survived by her adopted son Ronnie Taleronik.

She was preceded in death by her parents and by her sisters Shirley and Mary Jane.

Special thanks to those who gave generously of themselves;  TCF and US Bank representatives and all those at the Gateway Café, to Donna and Esther Taleronik and Stan, Faye and Lena Dorff for their continuous love of family. Sincere thanks go to Jane for your assistance during the most difficult days of her life; to Paul, Jack, Joe and Jose for their repeated, selfless acts of kindness. To St. Joseph’s Home for their tender care and support. A world of appreciation goes to Karen, Val, Leslie, Carlos, Sandy, Debbie and Nancy for taking care of every detail that needed attention. And most importantly, we recognize Florence Panka, Carl and Rusty Becker and Ginny Chianelli, her best friends throughout all her years, bringing joy and laughter to her days.

How blessed we have all been to be a part of the extraordinary life of Martha Taleronik-Dorff.

In lieu of flowers, memorials to St. Elizabeth’s Catholic Church or St. Joseph’s Home for the Aged.