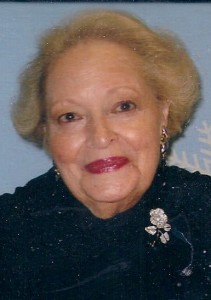 June was born in London England to Herbert and Elsie (Tutley) Hyman on June 5, 1924. She was an excellent student and a champion swimmer.

June met her husband Harvey during World War II when she was working in a music store. He pretended that he didn’t know how to use a record player, so that she would show him how. Harvey was invited for tea at June’s parents’ house and they were married in England on June 4, 1944.

June moved to the United States then and stayed with Harvey’s parents Rose and Sol LaVine. June and Rose worked for the Red Cross until Harvey came home.

June and Harvey were blessed with three children and made their home in Aurora Illinois where he worked as a teacher. Harvey preceded June in death in 1966. Since that time June found great joy in her role as grandma and even more joy in being a great grandma.

June was gifted with a wonderful sense of fashion and design. She enjoyed working at the 28 Shop in Marshall Field’s. She loved to decorate her home with Wedgewood, Waterford crystal and her large collection of beautiful paperweights. She made her own stationery and was known for her artistic and elaborate gift wrapping.

June loved gardening and especially enjoyed growing lavender as it reminded her of England.

June is survived by her son Lester (Becki) LaVine of North Carolina and her daughter Marsha (John) Hollister of Pleasant Prairie and by her grandchildren; Bryan (Tina) Wehr, Rhiannon

(Damian Swann) LaVine, Stephanie (Jamie) Moore, Drew (Melissa) LaVine and Lindsay LaVine, and by her great grandchildren; Cary Wehr, Brodie Moore, Mason Moore and James Lee. She is further survived by her sister Joan Jones of England as well as her niece and nephew Shirley and Alan both of England and by her sister in law Mary Hyman.

June was preceded in death by her parents, her husband, her brother Stanley, her brother in law Bob Jones and her son Jeffrey.