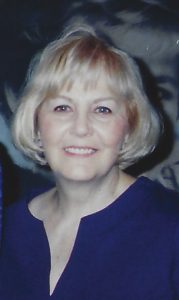 Marie and Rick were a solid team all of their married lives. They supported each other and worked hard to provide a loving home for their family. Marie worked as a hairdresser for many years before retiring to raise her family. She later worked with her husband in the family business, Chromium, Inc in Racine, WI. She was an original member of the Shoreliners Drum and Bugle Corps in the color guard unit. Marie was a devoted wife, mother, and a proud grandmother. Her family always came first. She was selfless, loving, helpful, and kind. She traveled extensively around the world with her husband and family members, always enjoying a new adventure. She loved being a homemaker and her home reflected her presence. She was an avid reader, enjoyed crossword puzzles, decorating, golfing, music, dancing, holiday traditions and was a Green Bay Packers fan.

She is survived by her husband Richard, daughters Stephanie (Steve) Lucas and Andrea (Thomas) Powers, her five beautiful and beloved grandchildren, Riley, Tyler, Lauren, Cole and Paige, two sisters, Patricia (Richard) Nygro of Racine, WI and Norma Tyler of Union Grove, WI and her Aunt, Georgia Pillizzi of Racine who was like a sister to her. She was preceded in death by her parents, a brother, Gregory Johnston, paternal grandparents, Martin Johnston, and Clara (Michaud) Johnston Wierschem, her maternal grandparents, George and Helga (Petersen) Funk.

According to Marie’s wishes, funeral services will be private. The family would like to thank the staff at Froedtert South for their loving care and compassion as well as Dr. Lenny Montemurro.

“I read of a man who stood to speak at a funeral of a friend. He referred to the dates on her tombstone from the beginning… to the end. He noted that first came her date of birth and then spoke of the following date with tears. But he said what matter most of all was the DASH between those years. For the DASH represents all of the time that she spent alive on Earth… and now only those who loved her know what that little dash is worth. For it matters not, how much we own, the cars, the homes, the cash. What matters is how we live and love and how we spend our DASH.”