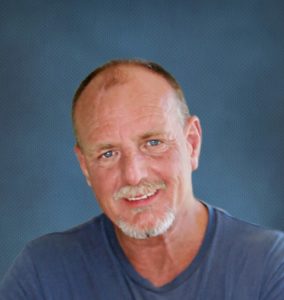 Dwayne Scott Linstroth, age 57, passed away peacefully at home surrounded by family after a hard-fought battle with mesothelioma.

He was born May 3rd, 1963 in Kenosha, WI and was the son of the late Robert Earl and Clarice Louise (Gagnon) Linstroth. After graduating from St. Joseph Catholic Academy, he worked in construction where he was a union operator for more than 32 years. He had also learned the art of horseshoeing from his father and was a well-respected and sought-after farrier in the area.

He had several lobbies including farming, woodworking and was known for his mechanical skills. He could fix anything and was often asked for help especially when it came to older farm equipment. He was an avid collector of vintage tools, equipment, and furniture. You could often find him at Bob Hagemann auctions on the weekends. If someone needed a piece of equipment or a part they knew if Dwayne did not already have it in his collection, he could certainly find it.

Dwayne was an active member of his community and often volunteered his time and donated materials. He had a strong believe in the importance of conserving and saving the land. He knew the area well and was the go-to for clearing brush and down trees. Every bridge on conservancy land was built by materials donated and delivered by him single handedly. Dwayne loved preserving and studying history and has also made donations to the Caledonia historical society and Racine heritage museum.

Dwayne was known for being incredibly kind, thoughtful, smart, and always willing to help anyone who asked. He was a generous man and someone you could always count on. He had instilled these values within his daughters, leading by example. He would often say “if someone is still working, the work isn’t done”.

Memorial services will be held at a later date due to Covid restrictions.

The family would also like to give special thanks to the nursing staff at Horizon Hospice and Jill and Carl Kortendick who have been amazing neighbors for the past 33 years.