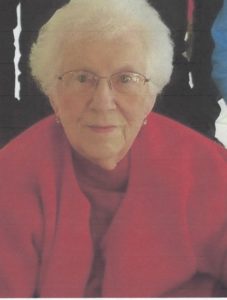 Lorraine Louise Schutz passed into eternal life on November 19th while living at The Legacy at St. Joseph’s.

She united in marriage with Paul L. Schutz on February 14th, 1942, in Kenosha, WI, at Grace Lutheran Church where she was a member for most of her life. Being a woman of strong faith, Lorraine taught Sunday School, sang in choir, and was a lector & usher and a member of Esther Group.

During the war, Lorraine worked in the office at Full Fashion Mills and was a volunteer nurse’s aide at Kenosha Hospital. Lorraine loved office work and after her daughters were all in school she worked in accounts payable at Brosk Office & School Supply from 1966-1974 and she retired from Camosy Construction where she worked in the office from 1974 through 1987. In retirement, she & Paul shared golfing and enjoyed many winters in Florida and Arizona, as well as a few golfing “road trips’ during the fall months. Lorraine was active as a Girl Scout leader with her 3 daughters; she also enjoyed quilting, knitting, and playing cards, bingo and dominoes. She was an avid reader, devouring books up to the end. She was a very accomplished seamstress-making the most of her daughters’ clothes when they were growing up. Creativity and love were felt in everything she did and many consider themselves lucky to have items (especially quilts) that she made.

A private family service will be held at St. Mary’s Lutheran Church. Burial at St. James Cemetery next to her beloved husband, Paul.

The family would like to extend their heartfelt thank you to the staff at The Legacy at St. Joseph’s for the loving and compassionate care given to Lorraine over the years.