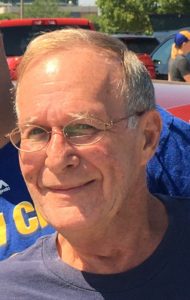 He entered the US Navy in San Bernardino, California in 1961 and was honorably discharged in 1963.

Gene worked at AMC/Chrysler for 30 years and was proud to be a member of the Teamster union. After retiring from AMC he worked at Manutronics/Sanmina for 10 years.

Gene loved the outdoors. He never missed a deer hunting season. He liked to work with small engines and mechanics in his spare time.

He is preceded in death by his parents, a brother, Howard Creekmore and a sister Dene (Creekmore) Smith, and his former spouse Leilani (Baken) Creekmore and their daughter Debra (Mark) Greko.

Due to the current state of pandemic a memorial service will be held at a later date.