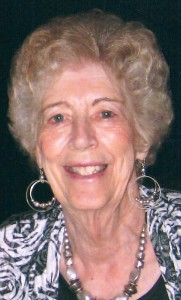 Linnea was born on March 11, 1927 in Rockford IL to Clarence and Mabel (Fors) Lord. She attended schools in Rockford IL, including Rockford College. On September 3, 1949 in Escanaba MI she married Elmer J. Stacey. They then settled in Kenosha. They were married for 62 years. Linnea was employed as a secretary to the general manager of Eaton Mfg. Co., a legal secretary for Attorney Donald Boyle and retired as a confidential secretary to the Asst. Supt. of the Kenosha Unified Schools in 1989. Linnea was a member of St. Mary’s Catholic Church. Past memberships include the Jr Women’s Club, Christian Mothers Society, Allamande Square Dance Club, and Duplicate Bridge Club. She also enjoyed volunteering at the United Hospital System since 1990. Her other interests were reading, working crossword puzzles, golfing and wintering in Arizona.

A Mass of Christian Burial will be held on Wednesday December 21, 2011 at 11:00 AM at St. Mary’s Catholic Church in Kenosha (7307- 40th Avenue). Visitation with the family will be held on Wednesday at the church from 10:00 AM until the time of mass. Private entombment will take place at All Saints Catholic Mausoleum. In lieu of flowers, memorials to Hospice Alliance would be appreciated.