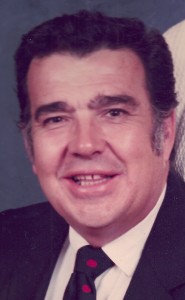 Thomas D. Roberts, age 81, a resident of Kenosha passed away Sunday December 18, 2011 at The Veterans Hospital in North Chicago.

Thomas was born on January 7, 1930 in Kenosha WI to the late Thomas E. and Lillian E. (Suckow) Roberts. He served his country in the Air Force Strategic Air Command in Tulee Greenland. On June 12, 1954 at St. Peter’s Church in Kenosha Thomas married Rose A. Alisauskas. He was employed as a salesman at various local car dealerships. Tom was a member of St. Peter’s Catholic Church. He was an active athlete in his youth and coached youth sports as an adult. Tom was an avid Packer fan.

Tom is survived by his wife Rose, two sons James of Kenosha and David (Paula) Roberts of Salem OH and one daughter Susan (Daniel) Reilly of Verona WI. He is also survived by four grandchildren Ashley Roberts, Caitlin Roberts, William Reilly and Sean Reilly. He is further survived by one sister Sarah Davis.

Thomas was preceded in death by an infant son Thomas and his parents.

Special thank you to the VA Hospital and home health aides Collette, Alice and Ruby.

A Memorial Service will be held on Wednesday December 28, 2011 at 11:00AM at St. Peter’s Catholic Church (3100 23rd Ave). Visitation with the family will be held at the church on Wednesday from 10:00 AM until the time of services. In lieu of flowers, memorials to the Kenosha VA clinic would be appreciated.