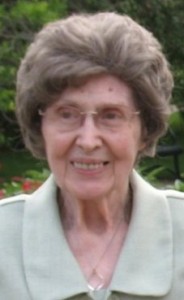 She was born on August 19th 1920 inKenosha, to the late Guiseppe and Adele (Tombesi) Laurenzi.

She was preceded in death by her parents; her husband; a daughter Barbara Ann; a son Angelo; and a brother Ezro.

A Mass of Christian Burial will be celebrated on Wednesday December 10th 2014 at 11:00AM at St. Mark Catholic Church in Kenosha. (7117-14th Avenue) Visitation will be on Wednesday at the church from 10:00AM until the time of mass. Burial will follow atSt. George Catholic Cemetery.