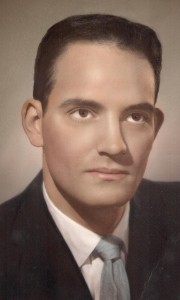 Jack was born on June 15, 1931 in Kenosha to Edward John and Gertrude (Zimdars) Sampson. Jack was educated in the schools of Kenosha and then attended the University of San Francisco. He was also a graduate of the American Academy of Art in Chicago. Jack spent many years as a commercial artist in the packaging industry and also worked in printing sales. He loved to paint and was known for his meticulous attention to detail.

On May 25th, 1968 Jack married the former Georgianne Christensen at St. Mary’s Lutheran Church. Jack found joy with his longtime membership at St. Mary’s where he volunteered in many capacities. He loved classic cars, a good classic car show and a great game of golf.

Jack is survived by his beloved wife Georgianne, his daughter Georgette (Douglas) Ball, and his son Jay (Deborah) Sampson, all of Kenosha and by his three grandchildren; Erin Ball, Eric Ball and Alec Sampson. Jack is also survived by his brother Donald (Judy) Sampson of Sister Bay WI.

Preceding Jack in death were his parents, a brother Charles Sampson and a sister Nancy Olle.

A memorial service will be held on Saturday December 6th 2014 at 12:00 noon at St. Mary’s Lutheran Church in Kenosha. (2001-80th Street). Visitation with the family will be on Saturday at the church from 11:00AM until the time of services. Burial will take place at Sunset Ridge Memorial park at a later date.

In lieu of flowers memorials to either St. Mary’s Lutheran Church or Alzheimer’s Research and Prevention would be appreciated.