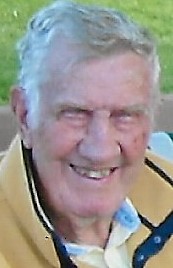 Lawrence Pflueger, age 88, of Salem passed away on December 5, 2017 at Aurora Medical Center with all his family at his side.

Born September 18, 1929 in Chicago, he was the son of the late Charles and Elsie (Alt) Pflueger. He served in the Army during the Korean War as a Military Police officer. On September 12, 1953, he was united in marriage with Juanita (Milkent) Pflueger at St. Mary’s Church in Kenosha.

Lawrence worked as a construction electrician for over 40 years and was a member of Local 127. He especially enjoyed the time he spent working on the Alaskan Pipeline. Along with his wife, they raised and raced Alaskan Malamutes. He held many positions at his church and volunteered for thirty years for his community association.He enjoyed Packer and Badger football, swimming and playing cards with family. He loved Barbershop music singing with the chorus and was lead singer in the Ken Cords quartet. Recently he has spent many wonderful hours with his friends from the Westosha Senior Center.

He was preceded in death by his parents, his brothers Charles Pflueger and Don Pflueger and by his sisters June Bach and Doris Pflueger.

Lawrence’s family is especially grateful to the ICU nurses at Aurora for their kindness and care.