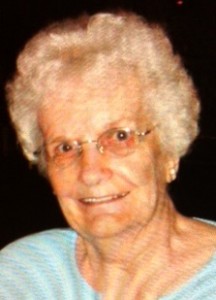 June L. Wade, age 89, a resident of Kenosha, died Sunday November 2, 2014 at Regent Manor in Kenosha with her family at her side.

June was born on June 3, 1925 to the late Charles and Elizabeth (Neumann) Jacobson in Kenosha WI. On October 4, 1943 she married Robert A. Wade Sr in Kenosha. They lived in Detroit MI for 13 years before returning to Kenosha in 1959. In her early years of marriage, June worked at Jockey International. She went back to school at Gateway and earned her LPN degree. She then worked at KMH and was later a private duty nurse. She volunteered for Hospice. June was a member of St. Marks Christian Mothers and the Red Hat Society. She attended all her children’s and grandchildren’s sporting events. She enjoyed all sports.

June is survived by her sons Robert A. (Lynn) Wade Jr of Kenosha, Thomas W. (Patricia) Wade of Sturgeon Bay WI and Philip C. (Kathleen) Wade of Greenfield WI and her daughters Lyn A. (Richard) Tepper of Grayslake IL, Marcia M. (Robert) Wade-Frey of Kenosha WI and Barbara B. (Joseph) Savaglio of San Diego CA. She is also survived by nineteen grandchildren and 30 great grandchildren.

A Mass of Christian burial will be held on Wednesday November 5, 2014 at 11:00AM at St. Mark Catholic Church in Kenosha. (7117 14th Avenue) Visitation with the family will take place on Wednesday at the church from 9:30AM until the time of Mass. Burial will follow at All Saints Catholic Cemetery. In lieu of flowers memorials would be appreciated to St. Mark Catholic Church or to the Hospice of your choice.

The family would like to thank June’s friends and family at Regent Manor, Hospice Advantage and all of her caring medical providers.