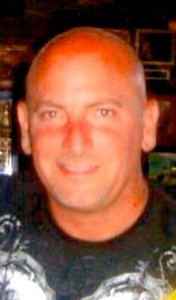 Todd M. Covelli 48, of Kenosha, passed away on October 27th, 2014 atCondellMedicalCenter surrounded by his loving family.

Todd was born on December 1st, 1965 inKenosha,WI. He was the son of Achille and Nancy Covelli. Todd was educated at Our Lady of Mount Carmel School before graduating fromBradfordHigh School class of 1984.

Todd followed in his father’s footsteps with his passion in the auto industry. Todd owned and operated several car lots in theKenoshaarea including: Jenny Motors, Auto Outlet, Anthony Motors and Uptown Motors. Over the past several years Todd was employed at Porcaro Mitsubishi inRacineWI.

Todd was an avid family man. He enjoyed spending quality time with his family, co-workers and friends. Sundays were dedicated to making his favorite Italian foods and watching the Chicago Bears. As a child Todd was involved in all sports but excelled in basketball where he played many years for Small Fry and CYC. He also enjoyed playing golf starting at a young age. Todd had his first hole in one at age 11 and continued to play throughout his adulthood.

Everyone who knew Todd knows how he lit up a room with his smile and bubbly personality. He was a very kind, generous and loving man. Todd was known for his famous sayings and referencing everyone he met as “kid”. This loss will devastate everyone he ever met.

Todd will be deeply missed by: his children Brittani and Anthony, his mother Nancy, his brother Rick, sisters Jennifer, Julie, Jamie, his Nana Julia, his granddaughter Juliana and his soon to be grandson Frankie who Todd was so excited to meet. He will be missed by his nieces and nephews: Jessica, Crystal, Joe, Nick, Christopher, Kaitlyn, Rylan and Roman and also by many aunts, uncles, cousins, his significant other Vicki Rawlins, her daughter Mandi and their dog Bucky.

Todd is preceded in death by his father Achille “Kelly” Covelli, Grandfather Bernie Covelli and grandparents Gordon and Marion Seymour.