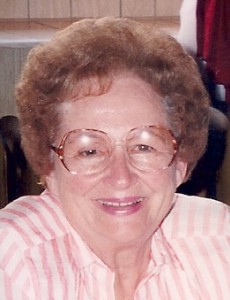 Born on August 12th 1927 inBarabooWI, she was the daughter of the late George and Rhoda LouVarne (Knapp) Stein.

She was educated in the schools of Baraboo.

She was employed as a floor manager for the Ben Franklin in the Villa Capri shopping center before taking a job with K-Mart as a personnel manager.

She particularly enjoyed being a Den Mother for the Cub Scouts and working with the Girl Scouts.

In her retirement, her husband and her enjoyed 10 years of working in tourism and campground living in the WI Dells. They would winter inFloridaand also enjoyed traveling along the gulf and areas ofTexas.

She is survived by her son Steven of Kenosha; her daughter Toni (Michael) Galligan of Kenosha and a step grand son Timothy Galligan.

She was preceded in death by her parents; her husband; one son Scott; one brother John Stein and a sister Beatrice Prine.

A Mass of Christian Burial will be celebrated at 12:00 noon on Wednesday December 31st 2014 at Our Lady of the Holy Rosary Catholic Church in Kenosha. (Corner of 22nd Avenue and 45th Street)

Visitation with the family will be on Wednesday December 31st 2014 from 9:30AM until 11:00AM at the Woman’s Club of Kenosha located at 6028-8th Avenue. (Across from Library Park in downtown Kenosha) At the conclusion of the visitation there will be procession to Holy Rosary Catholic Church to celebrate the mass.

Burial will take place at a later date.

In lieu of flowers memorials for masses would be appreciated.

The family would like to thankSt.JosephsHomeas well as Hospice Alliance for their compassionate care.