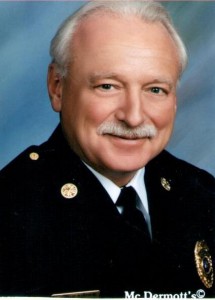 Joseph was born in Kenosha on August 29th, 1940 to the late Joseph and Vera (Patrick) Kiser. He was educated in the schools of Kenosha, graduating from Kenosha High School in 1958. On June 25th, 1960 he married Marie Romano. They later divorced. On September 29th, 1995 Joe was united in marriage to Lynn Belongia.

Joseph Kiser devoted his life to the Kenosha Fire Department. After being hired in 1966, he rose through the ranks of the department from Apparatus Operator to Lieutenant, Captain and Assistant Chief, retiring from the Fire Department in 2004 as Kenosha Fire Chief.  Joseph was the first Fire Chief in the city’s history to have achieved a four year degree. He graduated from Mount Senario College in Ladysmith, WI, with a degree in Public Administration with an emphasis on Fire Administration. Joseph was eventually hired by his alma mater and taught Fire Science for many years.

The legacy that Joseph leaves with the Kenosha Fire Department looms large because of Joseph’s dedication to his profession and fellow fire fighters. He was a member of Kenosha Professional Firefighters’ Union Local 414 for over 30 years and served as a member of the executive board for 23 years. During his tenure, he was involved in numerous contract negotiations, arbitrations and mediations with the City of Kenosha and he was a driving force in preparing the department for the demands of an increasingly technological future. The lives and careers of hundreds of fire fighters have been improved through the contributions of Chief Joseph Kiser.

Although Joseph retired in 2004, he lost no time in filling his life with new challenges and adventures. He was a Certified Gemologist, working in that capacity at Gottfredson and Nichols Jewelers in downtown Kenosha.  He once owned a Dairy Queen in Kenosha and previously worked at Tyson’s Sporting Goods, doing gun and clock repair. Many people would recognize him from his recent work at Steinbrink’s Piggly Wiggly. Joseph loved hunting, dirt biking and bowling, but saved his true passion for the game of golf.

Left behind to cherish his memory is his wife Lynn of Kenosha, his children Joseph (Eileen) Kiser, Thomas Kiser, Jeffrey Techert and Kelly (John) Mauser all of Kenosha and Jeannine Kiser of Chicago and his grandchildren, Joseph Jr., & Allie Kiser, and Emily & John Mauser. He is further survived by his brother John Kiser and his sister Dorothy Kiser, both of Kenosha.

Funeral services with full Firefighter Honors will be held at 3pm on Saturday, February 7th, 2015 at 3:00PM at First Presbyterian Church in Kenosha. (1803-83rd Street) Visitation with the family will take place on Saturday at the church from 1:00PM until the time of services.