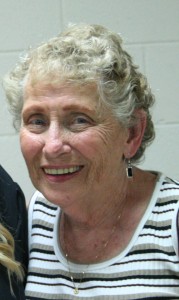 Ann L. Clausen, age 85, of Racine passed away peacefully on Friday January 30, 2015 at Serenity Villa in Slinger with her family at her side.

Ann was born April 6th, 1929 in Racine, she was the daughter of the late Max and Rose (Horvath) Petkovich.  On September 24, 1949 she was united in marriage with Richard Clausen at First Evangelical Church of Racine.

Ann spent her early years working for Don Hutson Cadillac and later running her own wallpapering business with her good friend Janie. She was a member of the 5th Street Yacht Club women’s auxiliary, Salmon Unlimited Wisconsin, and the Racine Ski Club. She joyfully volunteered for many projects for the City of Racine.

Ann is survived and will be deeply missed by her daughter Jean (Peter) Rogowski of Hartford WI and by her grandchildren Alexandria (Brett Kreais) Rogowski and Zachary Rogowski both of Hartford. She is also survived by her brother-in-law Charles Clausen of Racine, by her dear friends Janie Madison and Cindy Harris and a host of nieces, nephews, other family members and friends.

She was preceded in death by her husband of 55 years, Richard in 2004, her parents Max and Rose;  as well as her brother and sister-in-law Charles (Dorothy) Petkovich.

A Service of Christian Burial will be held on Saturday February 14, 2015 at 12:00PM at Evangelical United Methodist Church (212-11th Street Racine). A time for visiting with the family will be held at the church from 10:00 AM until the time of services. A private burial at Southern Wisconsin Veteran’s memorial Cemetery will take place at a later date.

In lieu of flowers, memorials to the American Cancer Society or the Alzheimer’s Association of Southeastern WI  would be appreciated.