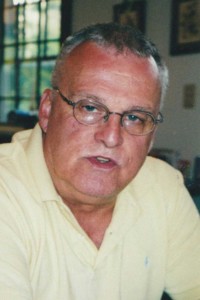 John J. Gilmore, a longtime resident of Kenosha Wisconsin died peacefully Monday, November 27, 2017 at Aurora Medical Center. John was born in Rochester, New York on July 26, 1940 and lived his early life in Syracuse, New York until entering the Navy. He started his naval service in Great Lakes, Illinois, then Philadelphia and back to Great Lakes. He loved the area and was persuaded to stay in Kenosha after meeting his lifelong friend and business partner, Don Franks.

John’s nieces and nephew saw their Uncle John as the fun party uncle who was the life of the party. They also saw their uncle had a carefree spirit and loved and enjoyed life. His last big trip home for a party was to attend his niece, Sarah’s wedding in 2008.  Even though he needed a wheelchair at the time, there was no stopping his spirit and vivacious personality to amuse and captivate the many guests attending.

John was pre-deceased by his mother, Ruth Gleason Gilmore in October 1967, his father, Joseph V. Gilmore in January 1982 and his nephew William Q. Gilmore in April 1987. John was also pre-deceased by the only grandmother the Gilmore boys ever knew and loved, Katharine V. Quinn. He is survived by his two brothers, Rick (Cathy) Gilmore of Camillus, New York and Billy (Joanne) of Charlotte, North Carolina. John is also survived by his nephew, David (Renee) Gilmore and his four nieces, Megan (Ron) Law, Sarah (Jeff) O’Neill, Barbara (Richard) Racculia and Lindsey Gilmore. He is also survived by 9 great nieces and nephews and 1 great grand niece.

We are eternally grateful for all the love and care John’s friends have provided to our brother, right up to the end of his fantastic life. Rick and Cathy want to thank Denise and Joe and Byron and Nancie for their support when we visited John shortly before he died and for making sure Rick and Billy’s wishes for their brother were carried out. We would like to thank Edward Fisher for singlehandedly making it possible for John to stay in his apartment for as long as possible and for Aurora Medical Center for the care they provided in the last days of John’s life. At John’s wish, he will be cremated.

For many years John owned Franks Diner with his beloved friend, Don Franks.  John presided over a place that was welcoming to all…full of vibrant conversation, laughter and good times.  It was a Kenosha institution. The famous ‘garbage plate” and “Order what you want, eat what you get” were part of the Diner charm.

John touched many lives in Kenosha.  He was the life of the party; compassionate, passionate and generous.  Now that John has left us it is up to us to continue his legacy of intelligent irreverence and decency.  We, who knew John well, loved him and will greatly miss him.

In lieu of flowers, memorials to Hawthorn Hollow or Kenosha Human Development Services are appreciated.

A memorial service is scheduled for Monday December 4, 2017 at 6:00PM at the Kemper Center Founders Hall in Kenosha. (6501 3rd Avenue) Visitation with his friends and family will be on Monday in Founders Hall from 4:30PM until the time of services.