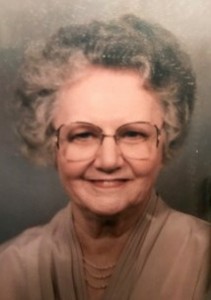 Doris Kruse Swan, age 95, of Kenosha, passed away on Tuesday December 5, 2017 at Azalea Place in Kenosha.

Doris was born in Chicago, Illinois on March 26, 1922. The only child of Ernest and Clara (Bahnfleth) Kruse. She was united in marriage with Kenneth I. Swan June 26, 1942 and moved to Libertyville, Illinois to raise their children.  She has been a resident of Kenosha for the past 30 years.

Doris enjoyed traveling, was an award-winning gardener and was a dedicated volunteer for both the Salvation Army and the Shalom Center Shelter and Soup Kitchen.  She was a warm and loving mother, grandmother and great grandmother.

She is survived by her children James K. (Diane) Swan, Janis Steber and Jeffrey (Linda) Swan, nine grandchildren and nine great grandchildren whom she cherished. Dear friends William and Joanie Rosen of Deerfield, Illinois whom she considered family also survive her.

Her parents, her husband Kenneth and her son-in-law Joseph Steber, preceded Doris in death.

Doris will be laid to rest alongside her husband at Rosehill Cemetery in Chicago. Services will be private.