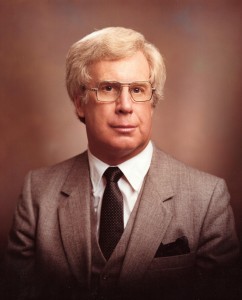 Once on a hospital visit to a parishioner, the Rev. John H. Millsaps Jr. was on the elevator when a young couple got on in obvious distress over a sick family member. The woman instinctively grabbed for her husband or boyfriend’s hand, unwittingly clasping Rev. Millsap’s hand instead. Rev. Millsaps did not flinch but just squeezed her hand tightly. Only when the couple prepared to exit did she realize her mistake.

This scene captures perfectly the essence of Rev. Millsaps, a United Methodist Church minister who during his career in Mississippi and Missouri combined a deep understanding of and compassion for others with a keen sense of humor and wit.

Pat Baker, a former parishioner said, “John Millsaps was the first person who ever told me I was a person of worth and that changed my life.”

Baker was just one of many lives Rev. Millsaps transformed through his ministry. He challenged individuals to live up to the ideals of the Christian faith but also helped them to understand and accept their individual worth and importance. His ministry was a lifelong mission to help congregations navigate life with dignity and integrity.

Born in 1928 to John and Eleanor Millsaps in West Point, Miss., Rev. Millsaps grew up in this northeast community and earned his undergraduate degree from Millsaps College, in Jackson Miss.

Early in life he recognized the ministry as his professional and personal calling. In fulfillment of that calling he earned his Master’s in Divinity from the Candler School of Theology at Emory University in Atlanta and in 1953 was ordained as an elder and minister in the United Methodist Church North Mississippi Conference.

Also in 1953 he married Marion Joy Neudecker of Memphis, Tenn. and the couple began his first ministry in Lambert, Miss. After serving a number of churches in the state, Rev. Millsaps transferred in 1967 to the Missouri Conference of the United Methodist Church and lead congregations in Pacific, Kirksville and St. John’s before retiring.

Even during his retirement in Washington, Mo., Rev. Millsaps continued to serve a local United Church of Christ congregation.

He was known for his thoughtful and challenging sermons, in which he sought to help congregations understand current issues through the prism of the Church and the teachings of the Bible.

He also worked to involve the churches he led in the community and thought it important to develop relationships with community leaders.

At the height of the civil rights struggles in the mid-1960s, Rev. Millsaps also took a strong stand, along with a small group of like-minded Methodist ministers, urging people in northeast Mississippi to follow the example of Jesus in terms of opening up a closed society and creating opportunities for African Americans. This stance was highly unpopular and forced most of these ministers to leave the state, including Rev. Millsaps and his family.

Within the Methodist Church, Rev. Millsaps also established a reputation for being able to unite congregations around building and expansion projects as churches grew both in size and ministerial outreach. He was responsible for major building projects in New Albany Miss. and Pacific, Mo.

Following Rev. Millsaps’ heart surgery in 2007, the couple moved to Kenosha and resided at St. Catherine’s until he went into the St. Joseph’s Nursing Home in fall 2013.

Rev. Millsaps is survived by his wife, two sons John, of Atlanta, Georgia, and Reed (Nina), of Kenosha, a sister, Eleanor Hazell of Waynesville, North Carolina, and two grandchildren, Joe and Allison, both of Kenosha and numerous nieces and nephews.

A memorial service will be held on Saturday September 20th 2014 at 11:30AM at First United Methodist Church in Kenosha. (Corner of 60th Street and Sheridan Road) Visitation with the family will be on Saturday at the church from 10:30AM until the time of services.

In lieu of flowers memorials to First United Methodist Church would be appreciated.