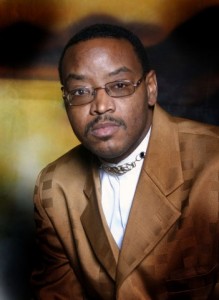 James Berry DeLoach Jr passed away 9/11/2014 at St. Catherine’s Hospital after a long battle with illness.  He is now happily with His Lord and family in heaven.

James Berry De Loach, Jr. was born on March 15, 1963 to parents James Berry DeLoach and Madgielean Ruth Hobdy DeLoach in Winnfield, Louisiana. The family moved to Orange, Texas when he was four years old. At a young age, he dedicated his life to Christ and became an active member of Starlight Baptist Church in Orange, Texas.

James completed his high school education at West Orange Stark High School with the Class of 1981 in Orange, Texas. He was a longtime, loyal member of the Gate City Lodge Number 31 Masons becoming a Master Mason in Orange,Texas. He attended Prairie View A&M University in Prairie View, Texas. During his education he was a class photojournalist and perfected his art for the school newspaper and fellow students. He then served our country by joining the United States Navy as a Chaplain’s assistant and protector. Most of his service was at Great Lakes Naval center in North Chicago, IL. In 1992 he completed his service, receiving an honorable discharge from the Navy and relocated to nearby Kenosha, Wisconsin.

He worked at Walmart’s photography studios for several years and went back to school in 1997. He attended Gateway Tech for two years for graphic art and photography and began his own photo studio Artistic Expressions. He joined Second Baptist Church, helped teach Sunday school and did photography work for his fellow parishioners at events.  He met his good friend Linda Bergstrom in 1992 and together they raised two sons James Berry DeLoach III and Robert M. Bergstrom.

Funeral services will be held on Wednesday September 17th 2014 at 11:00AM at Second Baptist Church in Kenosha. (3925-32nd Avenue) Visitation with the family will be on Wednesday at the church from 9:30AM until the time of services. Burial will follow at Southern WI Veterans Cemetery in Union Grove, WI.

In lieu of flowers please send donations to the family to cover the expenses of the funeral.