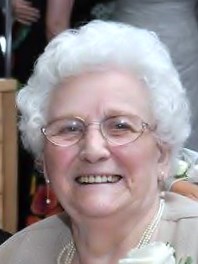 Verdelle R. Fulmer age 97, a resident of Pleasant Prairie, passed away peacefully on Tuesday September 9, 2014, at Manor Care in Kenosha.

Born July 2, 1917, in Union, Illinois.  The daughter of Fred Emil and Amelia (nee Nothnagel) Wieske.  She attended school in South Dakota and graduated from Kenosha High School in 1936.  She continued her education at the College of Cosmetology in Milwaukee.  Working at Vi Christensen’s Beauty Salon.  She was an active member of Grace Lutheran Church, and many of the groups within the church.

On April 19, 1941, she married Leland Timothy Fulmer Sr. in Kenosha WI.  They made their home in South Kenosha. She spent her life setting a wonderful example for her children.  Any one that met her was touched by her loving heart.  She enjoyed reading, sewing, baking, playing cards and fishing.  Lee and Verdelle’s farm home was the place where memories where made, big enough for horses and large family gatherings.  Verdelle also helped establish her daughters business, Northside Animal Hospital.

She had 10 great grandchildren that are near and far.

She is survived by a very special sister in law, Florence Wieske and her beloved dog Brett.

She was preceded in death by her husband, Leland Fulmer Sr, Son, Jerold Frederick, and two brothers Donald Wieske and William Wieske.

The family wishes to thank the fabulous staff at Manor Care and Kenosha Hospice Alliance for the excellent and compassionate care she received.

In lieu of flowers, please send expressions of sympathy in the form of contributions to Grace Lutheran Church.