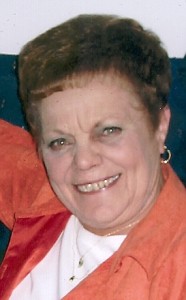 Jacqueline May Kollmann, age 64, a resident of Kenosha, passed away Friday May 11, 2012 at her residence after a courageous battle with cancer.

Born on May 20th 1947 in Madison WI, she was the daughter of the late Joseph and Lydia (Zimdars) Amann of Racine.

She was educated in Racine schools and was a graduate of Wm. Horlick H. S. She was an apprentice and graduate of the school of cosmetology at Gateway Technical College in Racine.

On January 6th 1965 she married Keith W. Kollmann, a Kenosha resident, at Bethania Lutheran Church in Racine, WI. They were happily married for over 47 years.

Jackie was employed at various salons in the Kenosha area as a cosmetologist for over 45 years. She started at the age of 15 as a “shampoo girl” and eventually became a salon owner of The French Doll Beauty Salon in Kenosha. Before retiring, she was employed in Kenosha as a salon manager for Haircrafters. Jackie also worked at 1st National Bank, So Fro Fabrics, and AMCCU of Kenosha.

Besides being an excellent seamstress, an ultimate Green Bay Packers fan, and an avid crafter; she was also a fantastic cook and was said to make the best corned beef in town! Jackie took great pride in her well kept & decorated home and truly enjoyed spending time with friends and family there. She also had a great love for animals and was involved in the Great Lakes Irish Setter Rescue.

She is survived by her two rescue dogs; Gunner and Lance; her loving husband Keith; son Kevin and his partner Merle Malterer, both of Kenosha; three sisters Lydia (Russell) Stephan of Racine; Patricia Amann of Racine; Constance (Dennis) Mordja of Racine; her best friend Betty O’Connor of Kenosha as well as many other nieces, nephews, and other family/friends that loved her dearly.

She was preceded in death by her parents; one daughter in infancy, Wendy Lee; and one brother, John Amann of Racine.

Funeral services will be held on Wednesday May 16th 2012 at 11:00AM at St. John’s Lutheran Church in Kenosha. (3833-8th Avenue) Visitation will be held on Tuesday at the church from 5:00PM until 7:00PM and again on Wednesday from 10:00AM until the time of service. Burial will follow at Sunset Ridge Memorial Park.

In lieu of flowers, memorials would be appreciated to either Hospice Alliance or the Great Lakes Irish Setter Rescue.