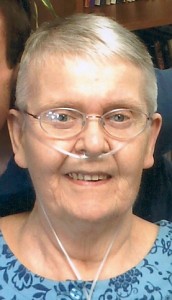 Ethel was born in Kenosha WI on July 10, 1933 to the late Ivan and Kate (Brittle) McGill. She was a life long resident of Kenosha and was educated in the schools of Kenosha. She attended Gateway Technical Institute in 1976 and received an accounting certificate.

On May 11 1955 she married Karl Becker in Kenosha. They would later divorce. And on October 20th 1984, she married Ed Pope. Both husbands would precede her in death.

Ethel was a longtime member of St. Mary Lutheran Church. She was employed as a bookkeeper at Acme Business Service in Kenosha. She also worked at the deli at Grants Dept. Store, Open Pantry, and Delfields Delicatessen for many years. Ethel loved to cook and bake for family gatherings. She also loved to knit and donated many knitted scarves to charity. She also loved spending time with her grandkids.

Ethel was preceded in death by her parents, her husbands, one brother Sam McGill, one sister Mary Angelo and one daughter Jan.

Funeral services will be held on Tuesday May 29, 2012 at 11:00AM at St. Mary’s Lutheran Church in Kenosha. (2001-80th Street) Visitation with the family will be on Tuesday at the church from 9:30AM until the time of services. Burial will follow at Sunset Ridge Memorial Park. In lieu of flowers, memorials would be appreciated.