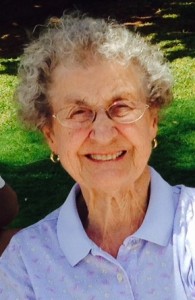 Helen was born April 13, 1925 inMinneapolisMNto Elmer and Ruby (Parker) Grant. She spent her youth inSuperiorWIand continued her education at Iowa State University-Ames, earning a BS Degree in 1946. She came toKenoshain 1949 to work as a Dietician atKenoshaMemorialHospital. In 1957, Helen married Frank W. Upright. She was a loving mother to Randy Upright of Los Angeles CA, Robin VandeWater of Hampstead MD and Ron Upright of Grand Rapids MI and grandmother to her many grandchildren. Her loving husband of 25 years, Frank died in 1982. She was active in the hospital auxiliary serving as President as well as volunteering for over 40 years in numerous areas of the hospital. She also volunteered for Hospice Alliance. Helen was a member ofTrinityLutheranChurchand served on the alter guild. She especially enjoyed playing cards and golf outings with her close friends as well as traveling with her children.

In lieu of flowers, memorials may be made to Hospice Alliance.

A Celebration of Life Event will be held at TrinityLutheranChurch(7104 39th Avenue) on Friday morning August 8th. Visitation will begin at 9:30AM followed by a service for Helen at 10:30AM.