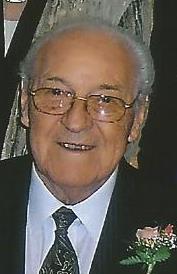 John E. Zuffa, age 91 a resident of Kenosha, died Wednesday July 30th 2014 surrounded by his loving family at the Hospice House in Racine.

John was born on September 22, 1922 to the late Joseph and Hermina (Grebac) Zuffa in Kenosha WI. He was educated in Kenosha schools and graduated from high school in February 1941. He started playing the clarinet at age 12. He played saxophone and clarinet with many area bands including John Bunic Big Band, Kenosha Pops, Reminiscing, Pat Crawford Big Band and many other small groups.

He went to work at Jockey International. He entered armed services in December 1942 and was assigned to the Army Air Corp.  He served as Engine Mechanic on B-17 and B-29 heavy bombers used by training crews. He was discharged at Camp McCoy WI February 1946 and returned to Jockey International. On May 11, 1946 John married Lillian A. Rossa at St. Anthony’s Church in Kenosha where they were life long members. He was a member of their choir for over 40 years. John retired from Jockey International October 1984. John was a member of the Slovak Gymnastic Union Sokol. His hobbies were music, golf, collecting stamps and coins. He volunteered at United Hospital Systems Kenosha Campus, at the clinic information desk for 13 years retiring in 2010.

John was preceded in death by his parents, brothers Joseph, Manuel and Thomas and sisters Erna, Ann and Mary.

A Mass of Christian Burial will take place on Friday August 8th 2014 at 11:00AM at St. Anthony Catholic Church in Kenosha. (2223-51st Street) A visitation with the family will be on Friday at the church from 10:00AM until the time of mass. Entombment will take place at All Saints Cemetery.

In lieu of flowers, memorials to either St. Anthony Catholic Church or the American Cancer Society would be appreciated.