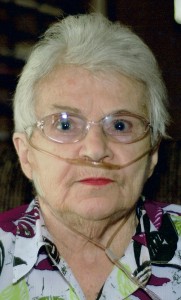 Dorothy L. Visintainer, age 82 a resident of Kenosha passed away Thursday March 13, 2014, at her residence surrounded by her loving family.

Dorothy was born September 25, 1931 in Chicago, IL to Homer and Mildred (Jargstarf) Holt. On October 4, 1952 in Evanston IL, she was united in marriage to Robert Visintainer, Sr.

Dorothy worked as a hostess at a Country Club, letter sorter at the main Milwaukee Post Office and a private housekeeper. She was an award winning Avon Sales Rep, no doubt because of her friendly nature, wonderful laugh and great sense of humor. She was a long time member of St. Peter’s Church and enjoyed playing bingo and traveling to Las Vegas. One of her most treasured memories was the 50th anniversary trip to Hawaii that her children arranged for Dorothy and Robert.  One of the greatest joys of Dorothy’s life was that she raised four good children and one decent husband.

Dorothy was preceded in death by her parents, a sister Ruth, two brothers Thomas and Dennis, a sister in law Bernice Phelps and a nephew Thomas Holt, II and a great niece Maria Manzella.

The family would like to extend a heartfelt thanks to all the staff at Hospice Alliance but especially to her main caregivers, Nancy and Sally for their compassionate care of Dorothy.

In lieu of flowers, donations to Hospice Alliance would be appreciated.