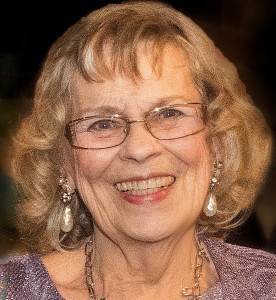 Dolores McMahon quietly left this earth in the early morning hours of December 22, 2016.  She was in hospice at Wheaton for a short time, where she came to rest after confounding the expectations of a lung cancer diagnosis for the past two years. During that time, as she has during all other times of trouble, Dee steered calmly into dark waters and found a way to abide. She met circumstances with characteristic understatement and grace, never wavering from showing the world the truly tender spirit, Mid-western practicality and the magical, mother-like qualities that could make anyone believe she might pull a rabbit out of a hat at any moment and it would be real. In that, she continued to give us all the gifts of love, hope, compassion, delight, and companionship that she always had.

Dee was born Dolores Prenot in Madison on July 8, 1936. She went to East High School, supporting herself by working for Oscar Mayer at age 16, where she ran the brand new IBM keypunch system – earliest forerunner of today’s computers. She met John McMahon in school and they were married on December 21, 1954. The young couple set up housekeeping and created a family, beginning with Lynne, Kass, and then Jeff. John died on January 11, 2002.

In Madison, Dee began her career with the State at Central Colony as Admin. to the Superintendant. During the early ‘60s nuclear era, Dee was tasked with helping develop the overall evacuation plan for patients and campus staff in nuclear emergency; in a disaster her role would also be to operate the teletype machine to communicate with government and rescue authorities from the bomb shelter.

The family moved to Beaver Dam in 1966. Dee became President of the local PTA and developed the first program to implement sex education at the grade school level. She taught her kids to cook and manage household tasks, took in and sometimes put her foot down at the numerous stray dogs and cats that John brought home, and ran a renegade Girl Scout troop for her daughters and their friends. When John’s job required moving to Racine in 1970, Dee was the leading candidate for President of the Beaver Dam School Board.

During the years of life in Racine, Dee and John continued an early tradition of opening their home to individuals who found themselves down on their luck, or just down; many a stranger became a friend around their dinner table and found shelter in becoming extended family beneath their roof. Dee was a fine art watercolor painter and sketch artist. She led her son’s Cub Scout pack and for a time operated her unique gift shop, The Giftree. She later managed Quality Candy in Racine, retiring from the company after 25 years.

After retirement Dolores fulfilled her goal to become a tutor of adult English-language learners for the Racine Literacy Council. She brought her magic to costuming for the Racine Theater Guild and was a volunteer for Kenosha Unified Schools, which awarded her a “Friend of Education” award in 2008. She did her own landscape architecture, creating a backyard garden that brought her joy every season. She went to Costa Rica to attend Spanish Immersion School with daughter Lynne, and became a Polling Captain for Mt. Pleasant. She traveled a great deal too, often meeting her daughter Kass in an airport somewhere and striking out on an adventure to someplace neither had ever been. This way, she observed the spring bird migration along the Texas Gulf Coast one year, and explored Savannah and Charleston another year. She regularly visited the West Coast and San Francisco. This June, Dee took her second Route 66 road trip, ending in Albuquerque where she climbed into the basket of a hot air balloon and floated into the skies above the New Mexico desert.

Dee has bestowed a lifetime of love upon so many, including daughters Lynne Steren (John) of Racine, Kass McMahon of Albuquerque, and son Jeff McMahon (Mitzi) of Racine. She leaves 5 grandchildren: Amanda Prince, Emily Ray, Denise Krekling, Ben McMahon and Jacob McMahon. She truly loved her great-grandchildren MacKenzie,Taylor and Mason Peterson, Summer and Eli Prince, Bryce and Lily Parrish, Jack and Eleanor Krekling and Winona, Finley and Emerson McMahon. She had a heartful of friends and neighbors with whom she shared decades of friendship, including Linda Koepnick and the notorious Bag Ladies.

A memorial service to celebrate Dee’s life will be held at 5:30 PM on Thursday, December 29, 2016 at Meadowbrook Country Club in Racine, (2149 N. Green Bay Road, Racine). Time to visit with the family will take place from 3:30PM until 7:00PM at Meadowbrook. Refreshments will be served.