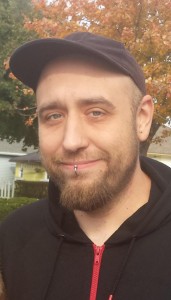 Dan was born September 25th, 1981 in Kenosha. He was the son of Amelia (Amy) Pflugrad and Michael Ingram. He attended Mary D. Bradford High School and graduated from Reuther High School in the year 2000.

Dan was well known for his involvement with the local punk scene. He loved music and enjoyed creating his own songs. He put together many shows both locally and away from home.

His greatest source of joy were his children, Demitri and Dillenger. He loved video gaming with Demitri and they were looking forward to playing the latest Zelda game on the newest Nintendo system. His time with Dillenger was spent playing cars, trains, coloring, watching movies, and just being silly.

Dan was intelligent, funny, witty and a deep thinker. We had many wonderful conversations and shared many movies. Those who truly knew Dan knew he was a kind, compassionate, gentle soul who would help anyone, anywhere at any time. One of his last posts was a cartoon that read “Homies help Homies, Always”. That was truly Dan. If Dan could ask one thing of all of you, it would be to get along and make the world a better place for his children and for your children too.

Dan will be dearly missed by his sons Demitri Ingram of Waterford and Dillenger Ingram of Kenosha. He is further survived by his mother, Amelia “Amy” (Ben Godlewski) Pflugrad of Waterford, his father, Michael Ingram of Kenosha, his brother Michael H. Ingram of Iowa, his grandparents, Howard and Frances Ingram of Florida, and many aunts, uncles, and cousins along with his niece Mercadeez in Iowa.

He was preceded in death by his grandparents Arthur and Betty Pflugrad.

A celebration of Dan’s life will be held at a later date and time.