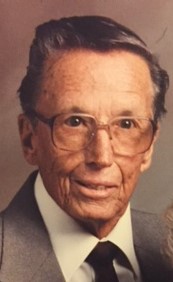 Dick was born on 25 January 1926 in Kenosha to Edwald and Jessie Norlander. He had one sister who has preceded him in death.

On 29 November 1947 Dick was married to his lifelong bride, Rita Funk, at St. Sebastian’s Catholic church in Sturtevant, WI.

Dick served in the U.S. Navy from 1943 until 1946.  He was an electrician servicing U.S. submarines in WW2.   He was stationed in Pearl Harbor, Hawaii.

Dick enjoyed golfing, shuffle board and playing cards throughout his life.   Most of all he enjoyed being with his bride and his family.

Preceding him in death were his parents (Edwald and Jessie) and a sister Jeanne Baron.

A Mass of Christian burial will be celebrated on Tuesday January 3rd 2017 at 11:00AM at St. Mary’s Catholic Church in Kenosha. (corner of 73rd street and 39th Avenue).  Visitation with the family will be on Tuesday at the church from 9:30AM until the time of mass. Burial will follow at Sunset Ridge Memorial Park.

In lieu of flowers memorials to either St. Mary’s Catholic Church or to the Kenosha Achievement Center.