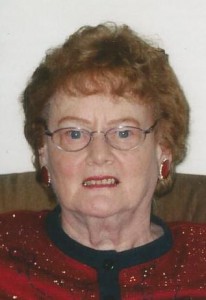 A life long resident of Kenosha, she was born on February 20th 1925. She was one of eleven children of Hugh and Gertrude (Willems) Schwaiger.

On June 26th 1948 she married Tom Martin at St. George Catholic Church. He preceded her in death on February 5th 2001.

She was a lifelong member of St. George Catholic Church. (St. Elizabeth)

She was employed at American Motors, the Simmons Company and in the lunch program at Washington Jr. High. She volunteered at Brookside and the Kenosha Public Museum. She was an avid seamstress and enjoyed playing pinochle with her brothers, sisters and their spouses. She treasured time spent with her family and enjoyed spending time with her grandchildren and great grandchildren.

Colette’s family would like to extend a heartfelt thank you  to the entire staff at Brookside Care Center for the tender loving care given to their Mother over the past 7 yrs., especially the 4th wing staff.  We are also most grateful to Hospice Alliance, Inc. for their care and compassion.