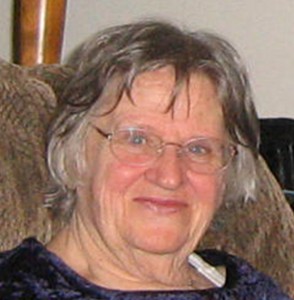 Audrey was born June 30, 1932 in Kenosha to the late Oliver and Ruth (Berry) Shields. She was a homemaker and took great pride in her five children. She loved puzzles, old movies, Elvis and the Chicago Cubs. Audrey especially enjoyed the time she spent fishing, camping and watching birds near the Sangamon River in Petersburg. She loved her children and grandchildren unconditionally and though her manner could be brusque, they all agreed that she was “one of a kind”. The “Aud-Fest” in honor of her June birthday is a family tradition that will live on.

Audrey was preceded in death by her parents, a brother William Shields and a daughter Nancy in infancy.

Funeral services will be held on Thursday December 12th 2013 at 7:00PM at Kemper Center Founders Hall. (6501-3rd Avenue Kenosha WI) Visitation with the family will be on Thursday in Founders Hall from 5:00PM until the time of services. Burial will take place on Friday at 9:00AM at Sunset Ridge Memorial Park in Kenosha.