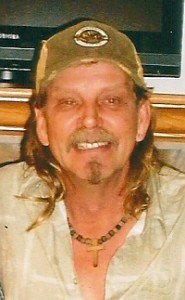 Steven A. Sluga, age 57 a resident of Kenosha, formerly of Las VegasNevada, passed away Friday March 22nd 2013 at St. Catherine’s Medical Center after losing his battle with leukemia.

He was born on February 3rd 1956 in Kenosha. He was the son of Richard Sluga of Sullivan WI and Joyce Callahan of Kenosha, WI.

Steven was a happy fun loving person who spread joy where ever he went.  He lived a simple life and enjoyed fishing, watching the Green Bay Packers play and Dale Earnhardt racing.  He was quite the humanitarian donating food and other goods to the homeless.

He was preceded in death by his former wife Renee Coppinger, daughter Crystal Sluga and stepfather Arnold Callahan.

A memorial service will be held on Tuesday March 26th 2013 at 5:00PM at the Kemper Center Founders Hall at 6501-3rd Avenue. Visitation with the family will be on Tuesday in Founders Hall from 3:30PM until the time of services.

The family would like to thank Dr. Palmer and the staff at Froedert Hospital as well as Dr. David Knight and staff at St. Catherine’s Hospital ICU.

“They that love beyond the world

cannot be separated by it. Death cannot kill