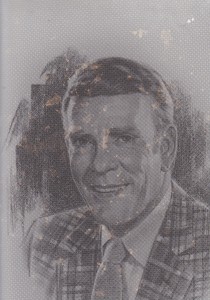 Mr. Allen was born July 3, 1922 in Buffalo, N.Y. the son of George H. and Alice (Randall) Allen, and the stepson of Catherine (Carpenter) Allen.  He was a graduate of Wooster School, Danbury CT. and Bay Path College, Springfield, MA.  After a stint with American Brass, shortly after Pearl Harbor, he enlisted in the Marine Corps where he attained the rank of 1st Sgt. He served in the South Pacific and earned two Bronze Battle Stars as well as a Presidential Unit Citation having gone ashore D-Day in Saipan with the 4th Division and D-Day Okinawa with the 1st Division.  At the end of the war he and other veterans were sent to China to accept the surrender of the Japanese Troops.  In February 1947, he was sent to San Diego where he received his Honorable Discharge and Good Conduct Medal. He returned to American Brass as a District Manager in Cedar Rapids, IA from 1952-1959 and was transferred to Kenosha as Manager of Distribution and Tube Sales.  After 30 years of service with American Brass, he accepted a position with Hussey Metals to handle Electrical and Sheet Sales for 11 years until his retirement.

Mr. Allen was active in partisan and non-partisan politics.  After his retirement in 1982, he became active in many civic organizations having served on the Library Board, as a member of United Way, and Kenosha Tax Payers.  He also served a term on the Kenosha County Board of Supervisors.

He was one of the founders of the Kenosha Towne Club, a Tennis and Swimming facility and a vocalist with the Brass Ball Bangers who played at several venues in Kenosha including the VFW.

In Politics, he served on the Kenosha County Executive Board, and several other GOP boards.  He was twice a delegate to the National Presidential Conventions.  For many years he was known as Mr. Republican in Kenosha County.

He was preceded in death by his father George H. Allen, his mother Alice Randall Allen, step-mother Catherine Carpenter Allen, 4 brothers and 3 sisters.

A memorial service will be held in Founders Hall at Kemper Center (where Mr. Allen served on the board) on       .  Friday, April 19th with visitation starting at 10:30am followed by a memorial service and luncheon.His ashes will be buried in New Milford, CT.

As dad would always say at the end of a difficult, long, or intense conversation, ”class dismissed,”, or “this meeting is over!” Rest in peace dad!!

Memorials to the Kemper Center or the Wounded Warriors Fund would be appreciated.