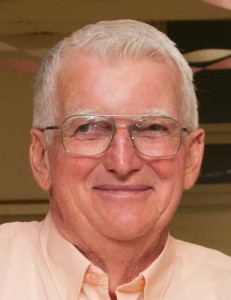 On June 6, 1964, Roland was united in marriage with Judith Getschman at the old St. Peter’s Catholic Church. Roland was employed as a social worker for Brookside Care Center and then he worked there as an administrator for ten years, retiring in 1992. Roland and Judy have been long time devoted members of St. Mary’s Catholic Church.

Roland loved life, especially his wife and family – and friends new and old. He always had a kind word and was caring and fun loving. His warmth and positivity brought happiness to many.

He never said anything negative about anyone and he was always ready to lend a helping hand and care for those who had nobody else to care for them.  For over 15 years he was the St. Mary’s  coordinator of the INNS program for Kenosha’s homeless. In his later years he enjoyed playing cards socially at the Senior Center (and Solitaire everywhere else!). He enjoyed listening to music and singing along. A former paper boy, he enjoyed many outdoor activities year round.  Of special importance was the responsibility of walking a friend’s dog – which brought much purpose to his last years.

On June 6, 2014 Roland and Judith celebrated their 50th wedding anniversary. The party that followed a June 7th mass was a blessed and most joyful gathering of family and friends.

The family is most grateful for prayers and support from all.  Judy is especially grateful for her faith community.

Roland was preceded in death by his parents and by a sister Gail.  Roland is survived by his wife Judy of Kenosha, his three sons; Jim (Liberty) Gregory of Dublin, Ohio, William (Gwendolyn Skaggs) Gregory of Kenosha and Michael (Richard Stangarone) Gregory of Santa Fe, New Mexico and his five grandchildren: Victoria, Will, Estevan, Spencer and Camille.

Burial will take place at a later date.

In lieu of flowers, memorials to the Shalom Center would be appreciated (http://www.shalomcenter.org).