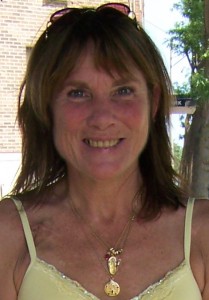 Born on May 29, 1954, in Cedar Rapids, Iowa, Robbie moved to Kenosha with her family in 1959 and was educated in Kenosha schools. She graduated from Tremper High School and then Gateway Technical College as a LPN. Robbie was very proud of her nursing degree, which

was to the benefit of those she cared for.

Robbie’s greatest love in life was always children, in particular her grandchildren Hailey and Alejandro. Her happiest times were spent carting them around via stroller or car on adventures they are sure to always remember. Robbie loved spending time with all of her children

and seven grandchildren. She provided them with love and fun as only she could, and she always looked forward to doing so.

grandchildren Hailey and Alejandro Aguilar, Isabelle and Avery Jenson, and Drew, Jazlyn, and Kylee Olson. She was preceded in death by her mother, Margery B. Cecil, her father, John N. Allen, and her step-daughter, Steffany Olson.

Robbie, your family prays that your journey in heaven is filled with everything you missed out of in your short life. Peace and love to you.

A celebration of Robbie’s life will be held May 5, at First Presbyterian Church (Kenosha). Visitation will be from 3:30-5 p.m., with a service to follow. In lieu of flowers, memorials to the family would be appreciated.