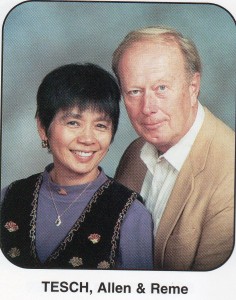 Remedios Herman Tesch, a resident of Bristol, Wisconsin, age 74, passed away peacefully on August 22nd, 2015, at her home, after two and a half years of fighting cancer.

Remedios was born on December 23th, 1941 in Ilagan, Isabela, Luzon, Philippine Islands, to Loreto Telan Claravall and Victoria Adelan Herman. She was born while the Japanese were bombing her village, located in the foothills of the Sierra Madre. She and her immediate family survived the Japanese invasion and occupation and, later, the American invasion and occupation during WWII; some of her uncles did not.

Remedios graduated from the University of Santo Thomas, P.I., with a degree in Pharmacy, and then trained to be a Medical Technologist at St. Mary’s Hospital in Brooklyn, NY. She moved to Hamilton, Ontario, when her student visa expired, and met her future spouse on a Greyhound bus while traveling across New York State. Fifty years ago, she was united in marriage with Allen Tesch in Urbana, Illinois, and began her “PhT” (Put hubby Through – the     U of I).

In 1971, Remedios became a U.S. citizen, and she and Allen made their home for many years in Waukegan, Illinois, where she worked in area hospital labs and eventually began teaching the Medical Lab Technology (MLT) program at the College of Lake County (CLC). She was instrumental in the beginnings of CLC, she earned her Master’s degree from NIU, she almost completed her PhD, and she was enormously proud of the MLT program and the many students whom she helped become professionals. Continuing the pursuit of excellence, she served as an auditor for the National Accrediting Agency for Clinical Laboratory Sciences, helping to evaluate and improve MLT programs all over the United States.

In her spare time, she enjoyed gardening and grew things, from rare orchids to strange vegetables. She was a member of the Conservation Club of Kenosha County (Bristol), served as a Rifle Range Officer, and even shot a National Rifle Match at Camp Perry in Ohio. She loved jewelry-making, soap-making, reading, photography, traveling, sewing and crocheting. She played the organ, piano, the guitar and was learning the zither. Remedios was a wonderful cook; she loved to experiment, often fusing Finnish, German and Filipino ideas. She loved to preserve the fruits and vegetables she grew herself; she could pickle just about anything. She and her husband enjoyed remodeling old houses, the latest being an 1857 farm house in Bristol, now known locally as “Fort Reme”.

Remedios is survived by her husband Allen of Bristol, by her son Lynn Loreto Tesch of Hollywood,CA, and her daughter Kimberly Victina Tesch-Vaught of Gainesville, FL.She is survived, in addition, by her grandson Jonathan Allen Lynn Vaught and by her granddaughter and namesake Reme Lorette Lee Vaught, both of Gainesville, FL, by brother Mario (Trinidad) Claravall, and by her sisters Tessie (the late Loy) Pattawi, Lourdes Claravall, Myrna Eshragh and Dr. Gloria (Caezar) Valerio, all of Oklahoma.

Remedios was preceded in death by her parents and by sister Letty Claravall, brother Dr. Leonardo Claravall and his wife Gloria and by sister Dr. Edna (Rudy) Lazaro of OKC (and P.I).

Remedios’s family is especially grateful to the staff of Hospice Alliance, the Red Hat Ladies and, especially, to the newly-minted CNA Reme Vaught, whose first patient was her grandma.